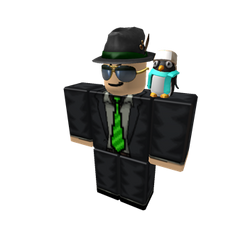 AlmightyNoob is a ROBLOXiwood actor, writer, and producer. He owned Hyperion Pictures Studios and worked as an actor. AlmightyNoob also was a reviewer, critiquing films in his segment "Uncle Noob Reviews".

In 2013, AlmightyNoob saw the BLOXY winners, and was amazed by the work of the ROBLOX film community. Shortly after he joined the community and began work on his 1st attempt at his directorial debut: The Thunder Noob. The project was later pushed back due to a lack of an animator.

In late 2013, AlmightyNoob decided to create and host his own award show, despite many people's objections of being so new to the community and previous failed attempts by the community. The Golden Noob Awards was launched.

In February of 2014, AlmightyNoob started up a personal channel aside from his channel for Hyperion Pictures Studios. The majority of the content on this channel is gameplay commentary and a few machinima style videos. Almighty also appears in other gameplays from other youtubers.

On May 8th, 2014, AlmightyNoob handed down the rights for The Thunder Noob to Zyphra as a birthday gift.

In May of 2014, AlmightyNoob began work on Goodnight Saigon . He hired various cast and crew including ThecapcomFreak as a co-writer to the movie.

In late January and early February of 2015, AlmightyNoob was caught in a wiki conflict between ██████████ over administrative issues. Due to the stress and unwanted politics that came about in his position of being a wiki administrator, AlmightyNoob retired from the community on February 2nd, 2015. The rights to produce his films were given to Routess, however AlmightyNoob still owns the licensing rights.

On November 2, 2015, it was announced that AlmightyNoob would appear in ThecapcomFreak's upcoming films, Rescind: Elegies and Disharmonies of December and that he'd be making minor contributions to ROBLOXiwood. He has also been announced to be a co-writer for Endpoint's Time Heroes, and future Neverwakening Productions pictures.