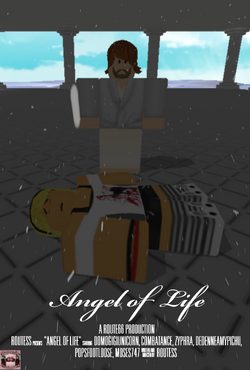 Angel of Life is a short directed and written by Routess. The short follows a girl named Kassidy as she becomes the Angel of Life after her suicide, but then wants to go back to her old life. It was released on February 14, 2014, to mixed reviews.

A girl named Kassidy Chance decides to kill herself due to being consantly bullied at school. She is brought up to Heaven and becomes the Angel of Life, as decided by Jesus Christ himself. But, she soon sees that everybody does care about her, and wants to go back. Unfortunately, only Jesus has the power to send her back. Will Jesus let her come back to life? Or will she stay in heaven?

The film recieved had mixed reviews. It was mostly criticized for having a generic storyline, questionable plot, and writing issues. It was also well received by others for it's emotional theme and it's soundtrack.