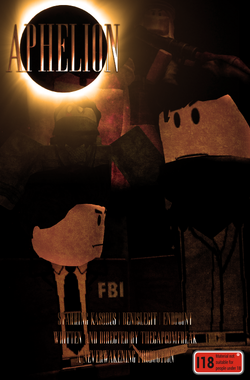 Aphelion is a 2017 film directed by somekiryu. It is a reboot of Eclipse. It is the first film in the Rescind Cinematic Universe, preceeding Numbers.

After Daniel's helicopter explodes, he finds himself with superpowers; skin hard enough to resist bullet wounds and concussive force. Shortly after, he's visited by an FBI agent, who informs him he may be in over his head.

Aphelion is a reboot Eclipse, one of the first films in the RCU. Production started on August 4th, 2017. Filming began the same day. Aphelion story-writing wrapped up on August 23rd, and the film was released on August 25th, 2017.