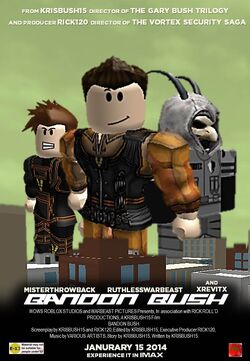 Bandon Bush is an American action/superhero film that was written and directed by KrisBush15. The film was co-produced by Rick120. The film was originalled due to kick off the Bush Cinematic Universe (BCU).

The film was broadcasted live to VIPs on the 12th of December, 2013, at 7PM EST. Due to the highly negative reception of the film at the VIP screening, the film was never released on the January 15, 2014 planned release date.

Tragedy strikes the Bush family - as Gary and Lule's son Bandon is born, Lule tragically dies after giving birth. 18 years later, Bandon, Gary and Gregory are just living out normal lives, but on one fateful day, a crash was heard from the sky.

The Krotex Empire has arrived to the planet of Robloxia, threatening the entire planet by saying that they will take over the planet, and harvest Robloxia's resorces for their race to survive. Bandon discovers the powers of the late evil mastermind; Instead. Gary teaches him how to use his powers for good, but Bandon's youth also gives him something; more than anything, than even his father has.

Production began on September 12, 2013 with KrisBush15 filming the first scenes of the movie. With help from Rick120, Kris is currently working on the production, stating that it is going 'grand'.

On the 5th of November, 2013, Act 1 of Bandon Bush was completed. Kris stated "It is production month for WRS Corporation, and now that Act 1 is done, BB Is already about 28 minutes long. Act 2 will begin soon and hopfully we will have it done by the date I have set"

On the 4th of December, 2013, Half of Act II was completed and the premiere tickets were released. Kris stated "We will have this done before the party, This will be the first time anyone has done anything like this, And this is how WRS is going to produce its movies from now on. This will give us a bit of a profit for the hardwork that we've done, and this is also giving a close to life experence with theaters. Everyone can watch it at the same time and give there opinions afterwords, so that we may change some things before its official release in January."