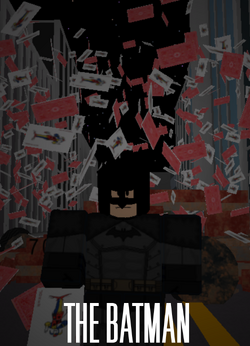 Batman is a cancelled film directed by Routess. The film is co-produced by Route 66 Productions and RobloxDC Studios. The film is based on the DC Comics character Batman. The first of two parts were released on August 24, 2014.

The Joker has escaped from Arkham Asylum yet again and is headed to Lebanon with missiles in tow, as Robin goes searching for the truth about his mother, and Batman is caught in the middle, having to make an impossible decision.

The idea to create a Batman movie started when RDC was made by MarioDude0123. Popsfootloose949 signed on to direct a Batman adaptation for the (now defunct) RobloxDC Shared Universe, with plans for multiple sequels and series spinoffs. On November 5, 2013, BenIsLegit entered RDC and arguments broke out between Pops's plans for his Batman and Ben's Batman in World's Finest. When TMF took over leadership, Pops was let go from the project and Moses747 was hired to take control of the project. Later, Moses stepped away from the movie and BenIsLegit was hired to direct, before a falling out that caused TMF to fire BenIsLegit from the project.

On June 6, 2014, hired Routess to develop the project, and renamed the film to "Batman". Production began soon after Routess was given the rights. Script writing finished in late June. Filming began on July 12th, and so did editing. After RobloxDC was taken control of by new leadership, Routess attached Olliekins and BenIsLegit to the film as co-directors. After nearly a month of work, Part 1 of the film was released to a mostly positive reception. On August 25, Routess removed the film from RDC and made it independent, and on October 14, Routess agreed to have the film back in RobloxDC Studios. On December 26th, 2014 Routess has dropped Olliekins and BenIsLegit as co-directors for the film.

It's likely that the film is discontinued, and no news has been made about part 2 or 3.

The first part of the film had a mostly positive reception, with critics praising the character design, the visuals, the good pacing, the good story, the good script and the great music choices. The critics, however, did dislike some of the inconsistencies (no cape for Batman) and the lighting in some scenes.

The movie had overall positive reviews and was seen as one (if not the best) RobloxDC movie of it's time..

At the 2014 BLOX Awards, the film was nominated for five awards including Best Picture, but won none.