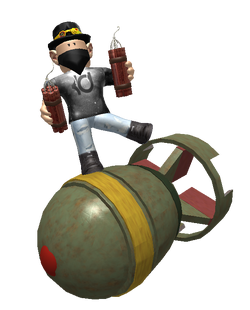 Bobtheclumsyman is a film director and actor.

In the year 2009, Bob joined Roblox. He then found himself making videos with his friends, mostly advertising games or making shorts with them. Bob then decided to make a series dedicated to funny moments on Roblox, This was known as Blox Shorts, a short lived series that only had 1 season with 12 episodes.

After Blox Shorts, Bob started thinking of making a better series where he could express his opinions at the time and throw in a couple of jokes, this series was known as The Noob. After a couple of seasons and a film Bob got builders club in 2014 and decided to open up his own film company called Cinemblox. The group was going to start production on a original new film after The Noob Movie II: Dimension Tension but dropped it because of how it portrayed the dark theme surrounding the plot and the lack of knowledge it knew on the theme itself, Bob later on quit Cinemblox and refused to associate any of his productions with the group ever again.

Bob was going to retire in October 2014 but came back because he felt motivated to keep going. On the 2nd of August Bob released the 3rd installment in The Noob film trilogy, The Noob Movie III: Descent Into Eternal Darkness and in 2016, Bob started production on The Roviewer which quickly came to an end in the following weeks because of the story and reviews being too all over the place.

Bobtheclumsyman ended his long running roblox series The Noob with one final film, The Noob Movie V: Final Adventure, the director decided to continue film making but focus on new ideas instead of The Noob. On the 8th of October 2017, The Noob came to an end.

Bob focused on making first person narratives after ending The Noob, after making his first short film Roblox.mp4 he considered making another one with more depth and a cast