Bri is an upcoming crime-drama film written and directed by AwesomeAlexK and produced under AAK Studios. The movie is expected to come in December 2017/January 2018. 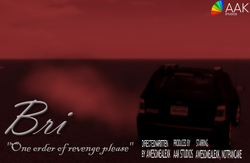 After Brianna Bou is mysteriously murdered at her suburban Bloxcago home, with no explanation or motive given, her husband, Lee, plans to find out more about the murder, the murderer and get revenge as he travels around the Midwest. He is accompanied by his rather "dirty" pal David, who has access to all sorts of technology and can play the system in the favor of Lee. Meanwhile, his other friends Ash and Nathan try to discourage Lee.

Production on the film started on October 2nd, 2017.

The first scenes (which were around 5 minutes) were shot on October 3rd, 2017.