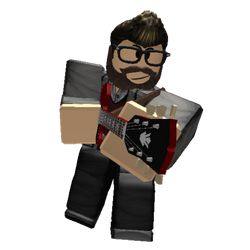 BugaMeister is an American actor, writer, producer, and director.

After coming across ROBLOX in 2009, BugaMeister would play as a Guest until he joined in April of 2011, and would not come across ROBLOXiwood until the middle of 2012, when BugaMeister came across Miles Morales: Ultimate Spiderman by Throwback Studios. He became interested in working with them as an actor. This was the start of his ROBLOXiwood career.

In 2015, admist collaborations between Poppleworks and BugaMeister, The Poppleworks Cinema was built. The cinema would soon go on to be the set of the short Buga and Pops' Ghost Hunting Adventure. The short recieved extremely negative reception, which discourged BugaMeister from directing. He ultimately decided to stick to writing, acting, and building. The script for the first episode of Dead of Night was finished while BugaMeister during the Summer of 2015, however writing of the second episode ultimately went nowhere, which led to cancellation of the series. Later, BugaMeister acted as a lead role of the film Obligation. Shortly after, he removed all his works from his channel due to dissatisfaction with the reviews.

In 2016, BugaMeister acted as a stand in and extra and several films. He also began re-uploading on his channel. Most of the videos to be uploaded in 2016 would all be parodies, and nothing semi-serious would be produced until the release of Buga's Studio Tutorials. In late 2016, with the departure of BATMAN21005, BugaMeister would obtain the rights to Inside ROBLOXiwood (Show). The first episode of Inside ROBLOXiwood was released in January of 2017.

Not long after, Buga, while talking with Director Rick120, suggested the idea of a good Science Fiction film. An idea was tossed around for a little while of an un-named film, but ultimately it resulted in Nominal Scale. Buga later became an Executive Producer for the film, and on April 29th, 2017, aired an exclusive "Spot Trailer" for it on the second episode of the second season of Inside ROBLOXiwood.

Buga is currently working with Co-Writer, Wholesaleryan56, on his debut film, Antediluvian, Madformerspro on his film, Alicion, Inside ROBLOXiwood, AGavent on his film Paradox, and is now a standing Administrator and Bureaucrat of the ROBLOXiwood Wikia.