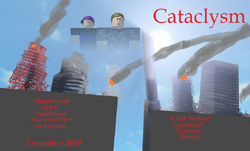 Cataclysm is a partially-cancelled 2017 disaster-drama film produced by JAStudios in association with ST477 Film Productions.

In the midst of an unprecedented global catastrophe, a Navy sailor and his roommate must escape from numerous crumbling cities to safety as the world is torn apart by devastating earthquakes around them.

After watching San Andreas the day it was released in May 2015, Johnairways8 was inspired to return to ROBLOX filmmaking and recreate a disaster film based off of his last one, 2012 Apocalypse. At first, he was unsure that he would be able to pull off a feature film, recognizing his previous ones were never finished. In September, he made the decision that greenlit Cataclysm and officially bring himself back into the community.

Johnairways8 announced in August 2015 that the script was being written. The script is expected to be completely finished in early 2017. Filming for part 1 was on and off since the movie's announcement. Production initially began on September 9th, 2015 and paused multiple times throughout 2016. In December, more actors were added to the cast. It was announced that part 1 would once again be pushed back, but only for an extra week. Production ended on December 18th, 2016, and part 1 was released on December 30th, although many rendering errors were encountered prior to the official release.

Renowned film director DonValuta later signed on to the cast as an extra to act in the second part of the film. The same week, a new voice actor was briefly searched for, and the name was added to the official cast list days later. This was done to replace Hiroticus for said character, who is still credited as a voice actor in following parts.

Some minor production on part 2 began, but did fully commence until 2017 due to a planned filming hiatus. During this time, Johnairways8 announced his plans to begin production on his next film, Turbulence, which he planned to begin filming by late-January going into February with ST477 and DonValuta. Johnairways8 announced a day after part 1's release that Cataclysm will now consist of three exact or near equal-length parts (20 minutes each) in order to try and keep a steady flow of production, and to grant time for other productions he plans to make throughout 2017. Johnairways8 has also expressed disdain for future voice-acted films, and planned to return to using subtitle dialogue in future films.

On February 25th, 2017, Ominous Biscuits was replaced as the voice actor for Eric Brown for hate speech. Transitdood subsequently stepped in as the replacement for the later parts.

However, on March 28th, 2017, Johnairways8 confirmed the film to be cancelled, stating: "Things have been stressful with school and life, along with the fact that my computer won't last much longer in its current state, and since we've gotten nowhere with Turbulence, and virtually nowhere with the second part of Cataclysm, I don't see it being finished. Not anytime soon, that is. It didn't get the traction I was hoping either. I had great ideas for a cinematic universe that would build off of Cataclysm elsewhere, but with everything going on, I don't see that happening anymore."

On August 14th, 2020, over three years after the film's cancellation, Johnairways8 posted a commentary video of all of the unreleased footage of the subsequent part(s) that had seen some form of editing while the film was still in production, and stressed to many unruly fans of the film that Cataclysm will remain canceled and that his days in the ROBLOX movie-making community are long over.

Part 1 received positive reception on release. The film was praised for its visual effects, voice acting, story buildup, as well as sound editing, and considered a massive improvement over previous works by Johnairways8, and a triumph in ROBLOX disaster films. However, it is criticized for occasional GUI appearances, pixelation, aspect ratio errors, and awkward camera angles. More recently, due to a significantly higher standard set within the filmmaking community, Cataclysm is considered to be poorly made.