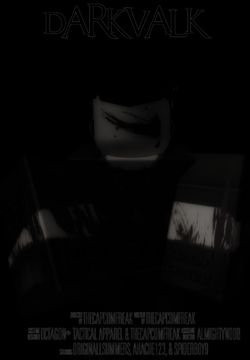 Darkvalk: Dissonance is the finale of the Darkvalk series. It replaces the failed project, Darkvalk: Finale, and tells the last half of the second season in the way Somekiryu wanted it to end. The film was released on July 30, 2014.

Darkvalk is faced with retrieving Amber from the anarchists, however, when it goes horribly wrong, Divinum uses the circumstances to overwhelm the resistance.

The idea had been in Kiryu's head ever since Darkvalk: Finale had been cancelled, due to some unforeseen circumstances. When Kiryu saw the chance to finally create the ending that he wanted for Darkvalk, he took it. Filming began on July 15, 2014. Filming only took fourteen days and finally ended on the 29th of July.

The film was finished editing and released the next day, July 30th, at a premiere at the Neverwakening Theater, to rave reviews.

Reception has been overwhelmingly positive, with the praises being the storyline, the character development, the action scenes, as well as how the movie tied up the loose ends.