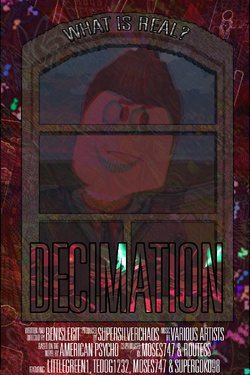 Decimation is a 2016 series written and directed by BenIsLegit. The series was discontinued, leaving only one episode released.

A teenaged boy named Brayden is ending his senior year at high school. As his older brother owns an online Hitman service, a conflict arises when a friend of Brayden's shows up as a target.

In 2013, BenIsLegit planned on making a film called Psychosis, which followed a homicidal high school boy named Brayden with schizophrenia losing his grip with humanity. The script was co-written with Brisingric and had over 30 pages of screenwriting. After 40 minutes of footage was lost due to a virus, Brisingric cancelling his movie Taylor (which connected the two films), and controversy questioning the use of mental disorders, the movie was cancelled. The cancellation was announced on a blog post found here.

In 2014, Ben had interest in rebooting the project under the name Decimation. The film was different completely on story aspect and had been planned for a release in December, but also was cancelled due to him planning on leaving Roblox and deleting his YouTube channel as a result of arguments with other memebers.

In June of 2015, Ben had reconnected with members and decided to return to ROBLOXiwood and finally attempt to make Decimation. The script for the first season was started in July completed in September. Revisions of the script were being made and filming began in August 2015.

For all of 2015, Ben filmed Decimation out of order based on what he felt like filming. Episodes from the entire season ended up being filmed, causing the release date to be longer than expected. In March 2016, Ben finished the episode and offered early viewings and reviews. The general response was mostly positive and averaged around 8/10.

On March 29, 2016, BenIsLegit released the first episode to Decimation.

Decimation was soon discontinued after Ben retired from ROBLOXiwood.

The reception for the series is mostly positive. The first episode didn't receive negative reviews, but was criticized for awkward C-Framing, lagging, and character designs. Most criticized for clunky and unnatural dialogue, although some praised it. Others praised it for smooth animation, set designs, and twist ending. Though there haven't been negative reviews, most agree that the series has room for improvement.