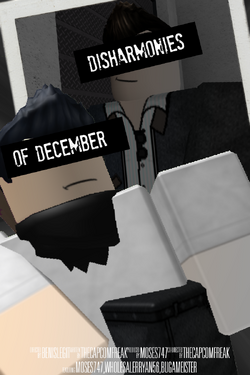 Disharmonies of December  is an upcoming adventure drama film directed by BenIsLegit and written by ThecapcomFreak. It is a reboot of ThecapcomFreak's Penance. The film will be produced by Coollegodude1.

Joshua Church, a hitman, is recruited to kill a drug lord: Mark Lowe. After recieving details, he ventures across the midwest with Quinn Roberts, Edan Bruner and Vincent Curnell to kill the kingpin.

In August 2016, ThecapcomFreak proposed the idea of BenIsLegit directing the movie. After reading the script, Ben showed interest in the movie and production started.