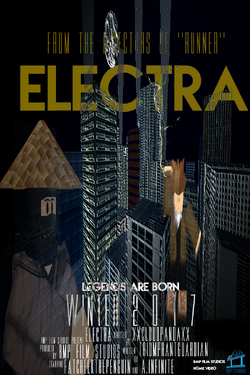 Electra is an upcoming superhero action film written by TriumphantGuardian, directed by armyperson557 and co-directed by TheCrazyInvictus

After a war veteran loses his legs, he consults a team of specialists promising a serum that can encourage the growth of new limbs, but when the serum gives him supernatural powers, he realizes he must use them for the greater good.

Concept for the film started at the same time the film "Runner" was being produced. However, the production for runner came to a halt when the director, armyperson557, went on a hiatus for almost 2 years. The script is currently being produced and the film is expected to release late 2019.

There is no reception as the film has not been released yet.

Media will be added once the film releases.