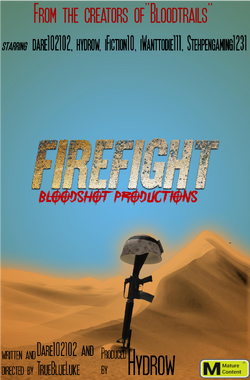 Firefight is a 2017 Action/Historical Fiction series directed and written by Dare102102, This will be his first series he will be filming after his first short Bloodtrails.

After a convoy was attacked, in which four U.S Contractors were killed, a unit of Marines are sent in to eliminate any extremist elements and help the Iraqi people stuck in the city of Fallujah.

The concept of Firefight came to Dare102102 when he was watching documentaries about the war on terror. The Pilot episode was made in very little time. Using free models, the in-game studio recorder and Movie Maker, it was released on July 4th 2016. Writing and Set design started to keep the viewers updated. In September 2016, Firefight was delayed from a Fall release date to an unknown date due to set, software glitches and a busy schedule. After 5 months of waiting, Dare102102 decided to revive the project because of his new found time and software. The release date was July 4th, about more than a year after the Pilot released. Episode 2 was shortly followed up with a release date of August 15th 2017. Firefight is currently on a hiatus due to Dare's busy schedule.

Reception for Episode One received generally mixed reviews, on average received a 6.3/10 due to boring scenes and lack of animation.