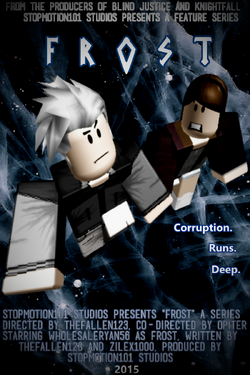 Frost is a 2015 series directed by Endpoint. It is the first Time Heroes series, and will feature two heroes from the Time Heroes Cinematic Universe (THCU).

During the Cold War of the 1900's, adopted orphan Mitchell Broussard and his sister attempt to put an end to a secret society who intend to use children as weapons of war.

During the production of Knightfall Part 2, directors Zilex1000 and Endpoint spent a night brainstorming for a new series. After coming up with an outline and characters, Zilex eventually quit; the project remained a secret until later on that year. After the release of The Renegade, Endpoint, AlmightyNoob, ThecapcomFreak, and Routess aided in polishing up the story and characters, and the script began to be written September 19th, 2015. A teaser trailer for the series was uploaded September 20th the following day, which has received positive reactions. The first episode of Frost was released on November 15, 2015. The series took a month hiatus after 2015, and production began once more in February, with Season 1 expected to finish in March 2016. The series finished in March 2016, and the second season was released through a short entitled "Ember" in August 2016.