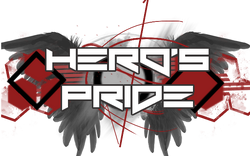 Hero's Pride is a short that was based off of the cancelled series, Hero's Pride. It was directed and written by Routess. The film recieved mainly positive reviews.

When an unknown hero from an unknown guild comes to town, word spreads quickly. He came for one reason, and one reason only, to regain his pride! This hero's name is Mysterium. On his journey meeting many of his old allies and friends, but also discovering a true, new evil with his mysterious fighting abilities, will he beat this greater evil? Or will his "other side" make him unable to do so.

The short had a good reception. The fight sequences, music choices, voice acting, and the look of the film was praised. Criticism came from the sound mixing, the character design, and a few editing and recording errors.