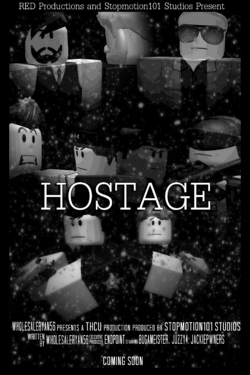 Hostage is a heist thriller directed by Wholesaleryan56 and written by Endpoint. It is the prequel to Blind Justice. It is a THCU film.

One year before Blind Justice, the murder of a police officer sends the Detroit Police Department into a manhunt led by Jason Stone and Riko Delio, where they quickly uncover that there is more to the shooting than meets the eye.

In the middle of Summer 2016, shortly before the release of Moon Wars: The Future Soldier, Wholesaleryan56 was inspired to start a directing career of his own. He brainstormed a crime thriller story revolving around the main character of Blind Justice, Jason Stone, and was granted permission from Endpoint to create the film.

Whole collaborated with Endpoint to write the script afterward, and the original script was completed in August 2016, with filming beginning on August 14, 2016.

The film was completely rewritten and rebooted in November 2017 and is set to be released in January 2019.

After over a year in production, Hostage was finally completed and released on April 7, 2019.

Hostage received critical acclaim, with praise going toward the story, animation, sequences, climax, and character development. Some critics noted that the pacing could have been improved upon at certain points, however. Many praised the film as the best in the Blind Justice saga, and one of the best in the THCU overall.