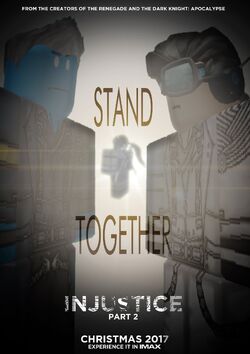 Injustice is an upcoming 2 Part Superhero film directed by Rick120. The films will be the 6th and 7th films in the Time Heroes franchise, following the 2015 film The Renegade as well as a crossover movie with Blind Justice.

The film has Rick120 and AlmightyNoob working on the screenplay while Endpoint acts as Executive Producer and creative advisor on the film.

Part 1 was released on February 1, 2017 with Part 2 for sometime in December.

Blind Justice heads to Ann Arbor city to investigate a string of brutal attacks, all baring possible links to the God-like being, Hyperblue and his past associates.

During production of The Renegade, Rick120 expressed interest in directing a film within the THCU, TheFallen123 permitted him to do so. Through-out the course of production, the concept changed. Rick later created the Time Hero; Rattle and had originally been slated to director a movie based around her- however later shifted interest to a Renegade follow-up.

After production had ended and during a skype conversation with ThecapcomFreak and AlmightyNoob, Rick proposed the idea of a "mini-Time Heroes movie". On September 13, AlmightyNoob agreed to assist in screenwriting, the following day: Rick announced on Twitter that he had began working on a screenplay, for the film- revealing the title under #Injustice- he released the teaser poster later that day.

After production on the Dream Clouds Reboot wrapped up, Rick's time was freed enough for him to finally being pre-production on the film, he is currently in the latest draft of the script. Filming officially began in June 2016 and is expected to run through the summer. On July 8, a teaser for the film was released.