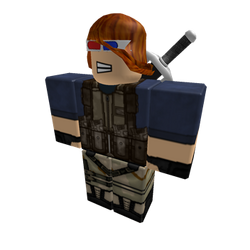 Madformerspro is a European actor and director. He is most commonly associated with Rick120, and his studio Rick Roll'd Productions.

Madformerspro joined Roblox in May 2009, starting with basic place building. He met with Rick120 in September that same year, learning he too plays Roblox. Both started out by building games.

For months they tried to create a place known as Wingz World V, a fan-made equivelent of the Wingz World Places by NearmissTFW. Not too long after that, Madlearned that Rick was making a film called Day of Destruction, and asked if he could be a part of it, which he then got involved in.

After the film was discontinued, Mad joined production of Vortex Security: War of the Raiders, after the success of the film—it was then expanded into a trilogy—which Mad had decided to stay on with. In late 2011, while filming Vortex Security: Game of Guns, Mad had started getting into a series of serious arguments involving actors which then expanded into hate mail, and he was temporarily fired from Rick Roll'd Productions by Rick. After ultimately returning a few days late, he continued to argue with actors like Shadowjazz, Sasuke12377 and Panthermaster47.

Madformerspro continued to work with Rick in Vortex Security: Endgame and Operation Sky Storm, respectively- by acting and providing sets and props for the films. He later played as himself in the loose-biopic Currency. Mad co-directed and assited editing of Dream Clouds: Part 1. Mad is currently working on a Vortex Security Webcomic, in June 2015 he returned to acting with Rick with the leading role in Transparency which was released later in 2015.