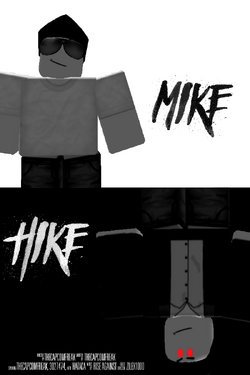 Mike Hike is a film series created by somekiryu. It follows Mike Hike and Clay Hay in their adventures.

The film series has eight films. The first seven are canonical in the original Mike Hike universe, while Punching Bag Nuub is a spin-off film.

A reboot under the title Numbers is underway.

Mike Hike is a pyrokinetic superhero who lives in Richmond, California. With his best friends, Clay and Jon, Mike fights enemies from all directions.

Mike Hike Mike, eighteen, grows curious about his father's absence. After finding him, his father reveals a monster he previously defeated, Zillga, may rise to attack Mike once more. Mike reluctantly takes up the task and begins training to fight Zillga and continue his father's legacy.

A year after the defeat of Zillga, Mike reclinces and regularly trains with Clay. However, multiple people begin to accuse Mike of appearing in the city at odd times and even attacking people. Mike searches for an answer, and only finds himself.

After moving, Mike, Clay, and his new girlfriend Sarah enjoy the new-found peace. However, this peace is soon shattered as a telekentic maniac, Gail, makes an appearance.

After faking his death, Mike goes into reclusion to learn and train. He discovers an astounding ability, and returns to Richmond to find it in shambles. Mike immediately knows who is responsible.

While relaxing with friends, Mike comes to a horrific realization. With the help of a stranger, he discovers an alternate universe.

After his 22nd birthday, Mike Hike meets a young childhood friend. Unlucky for him, the reunion is anything but happy.

Mike Hike and his friends are shocked to discover that his former enemies have come from the dead, seeking revenge. Mike's life is thrown into hate, anger, and old memories.

Mike enjoys his life and gets engaged. Later that night, he sees a strange figure watching him. He comes outside and calls for the person, with no response. He goes inside, not knowing that a creature is on the prowl, with a childlike love for his fiance.

Mike Hike: Accession is a spin off of the series Mike Hike. The aim of the series is to tell the original and full story. The film was split into five parts, and was eventually cancelled.

Numbers is a mini-series reboot of the original Mike Hike franchise. It follows Mike, Clay, Jon and Sarah as they attempt to vanquish a shapeshifting superhuman.