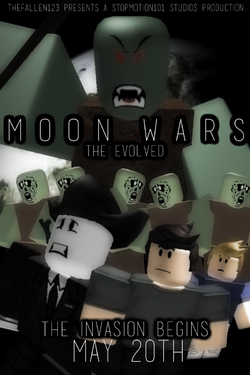 Moon Wars: The Evolved (also known as Moon Wars 3), is a 2011 action drama directed by TheFallen123. The film is the the third Time Heroes film in the Time Heroes franchise, and is the climax of the Moon Wars saga. It is the sequel to Moon Wars: Revenge Of The Zombie King.

Three years after the events of Moon Wars 2, Skull finds himself living with colleagues Carl and Chris, when suddenly the trio are whisked away by the FBI and placed on the front lines of a impending zombie invasion led by no one other than the Zombie Prince himself.

In late 2010, TheFallen123 had plans to create a third and at the time, final Moon Wars film. After technical difficulties with Moon Wars 2, Fallen decided to move on to Moon Wars 3. The film production began in early 2011, and ended summer of that year.