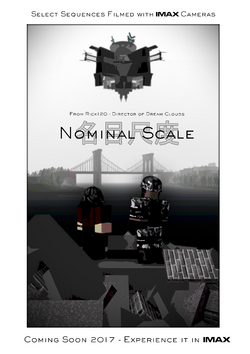 The film is currently in development with BugaMeister attached as producer for the film along with Endpoint serving as executive producer.

The film is due for a planned release in November 2017.

In 2031, humankind approaches it's pivotal moment, it's next stage in evolution, however a major incident threatens to endanger any potential, this moment may bring.

Nominal Scale went into pre-production during director Rick120's creative block during production of Injustice. Influenced by multiple sources, he worked on a script- originally titled Blackout before revisions led to an eventual name change.

After releasing Transgression and the first part of Injustice respectively, Rick decided to use his free time to work on the film. On February 3, a teaser trailer was released. Production officially began on February 6, with filming currently under way, with filming expected to wrap early November.