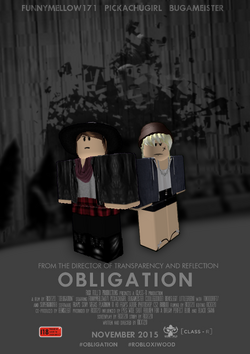 Obligation is a 2015 Dark-Romantic Drama film, written and directed by Rick120. The film was developed as part of a personal challenge of Rick's, as a way to release one more production of the year.

Things begin to get out of hand in Scott's romantic life, when his twin sister, Millie, begins to interfere in various ways. As he begins to uncover the reasons, Scott soon discovers the answer may not be a simple as he believed it to be.

After the success of Transparency, Rick opened his mind to going a step further with the idea of reality-like dark films and put forward an idea, which for a while he later put down due to his plans to work on Dream Clouds (Reboot). However he picked the plan back up again in early October 2015, mainly due to the lack of releases of the year.

After much consideration, Rick finally decided to put himself up to the challenge of, what he describes as capcom-ing a film and gave himself 3 weeks. Referring to an incomplete script from 2013 and after much revision; Obligation officially went into production, filming began on October 9, 2015. During Octoberfest 2015; Rick released a promotinal video in the form of a music video- which includes clips from the film as well as footage shot specifically for the it.

On October 27, Rick announced that the film was at the half-way mark of production, however also stated that the film would not meet the planned October 29, release date; meaning he'd failed the challenge. Inspite of this, Rick was still confident in getting the film released during November- ultimatley filming wrapped up on November 25 and was released that same evening.