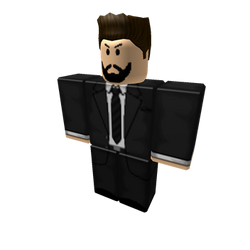 Poppleworks (formerly Popsfootloose949, Copskid949) is a retired American Robloxiwood director, and owner of Poppleworks Media. Despite releasing very little content due to a series of poor decisions and impossible goals, his career was primarily influenced by experimental writing techniques and styles.

Poppleworks joined ROBLOX in 2009 under the name of Copskid949, creating the account "popsfootloose949" just before joining the Robloxiwood Forum in 2011. He began his filmmaking career by working on his first and unfinished film, a remake of Back to the Future. When it was discovered that director Austin4ever was working on a slightly different version of the same film, they started up Robloxify Studios, beginning production on several unmade/incomplete films, including Camp Zombie and Ghost House. In December 2011, Robloxify Studios was shut down. During this time, Pops also began working with other directors such as Zilex1000 and DonCurrency. He set up his own company, Pops Productions, which became a subsidiary of The Mafia Films. In the company's run, Pops produced his first three shorts, Dead Call, Holiday, and A Day at Chuck E. Cheese's Where A Kid Can Be A Kid! Upon shutting down his company to escape tight restrictions by TMF, he quit and entrusted his account with appleworks.

Sometime later, Pops returned to his account and officially founded Poppleworks Media, a joint company between him and appleworks. Pops, MisterThrowback, and Halloweenfan26 founded the RobloxMarvel Cinematic Universe sometime later. This was taken on in addition to Infinite, Pops's involvement with Mister's original cinematic universe. The film would see itself in development hell until its final cancellation. The newly named "Poppleworks" was rehired multiple times by TMF as their leading actor, a subsidiary owner, a business partner, and finally a main actor. During this time, multiple pilot episodes were released on Pops's channel for series that were never picked up for more episodes due to almost completely negative reviews.

Pops was signed on to direct a Wonder Woman film as a part of RobloxDC Studios. He decided to postpone a long-term project, The League of Extraordinary Gentlemen, in order to work on the new film for a 2014 release. This decision was later reverted when RDC slowly lost directors due to conflict with The Neo-Avant Institution, postponing and eventually eliminating not only Wonder Woman, but also the newly-received position as the writer of World's Finest shortly after the leave of director BenIsLegit. When Pops once again made League his major priority, he decided to make prequels to the film. Multiple shorts and two series were planned, but the idea was ultimately scrapped. Pops also started collaborating with Coollegodude1 to write a Journey to the Center of the Earth-inspired film, although it never made it past idea stages. Pops restarted his acting career in Cosimo's Avenge reboot. Attempting to expand his company's reach, he began to plan collaborations with newcomers Drex112 and RyanA17. After numerous negative experiences with Drex and strong community backlash/bullying towards Ryan, both were dropped and Pops decided to leave the community temporarily.

Upon his return, a remake of V for Vendetta was planned in secret and began shooting in February. In addition, he had publicized plans to adapt Flowers for Algernon by Daniel Keyes and Harvey, a play by Mary Chase. Almost simultaneously on April 17, Pops signed on to direct the series Smoked Lines, based on AMC's hit show Breaking Bad and written by Assassain25 and Ternous, and Dead of Night, a zombie invasion story based on the novel of the same name by Jonathan Maberry and written by Bugativeron111.

He eventually abandoned Smoked Lines following creative differences and went on to work mainly with BugaMeister. During this time Pops would try to expand ROBLOXiwood's popularity through a series of large-scale projects which, once again, never happened. In his most successful attempt, he tried to weld together the roleplaying and filmmaking communities with an innovative idea. Five ideas for a series would be submitted, one of them becoming a fully-functioning roleplay based on a user vote. With minor edits upon its completion, a series would be made using the roleplay as a basis, while crediting the writers and offering them positions in his company for future projects, should they want to continue. During the project's run, it had two incarnations. The first one, roquinha9's Dark Truth, focused on four children bestowed with magical powers. After complaints of sexist and very limiting character molds caused much debate, the project's creator left. Englandish, now PickachuGirl, who sparked the idea of the second most popular series idea, was then asked to fill in with her own idea: 12 Infinity, the story of twelve heroes from different pieces of reality who must come together to stop an evil threat.

On the same day as the switch of projects, TEDOG1232, Littlegreen1, and Pops made an agreement. TED's cancelled series, The Adventures of Ted and Zander, would be remade. Due to the inactivity of zanderman222, however, Little took his place as the show's second main protagonist and Joey18916 was added on as the third. Pops did not have the time to commit to the show, and it was remade without him.

In the roleplaying forum, the 12 Infinity thread began to move slowly, as character development had gone on for three months. With this delay, Pops eventually cancelled the project. Pops decided to work on a long-term writing project, an adaptation of the Marvel Comics named The Marvels Project. After talking with BenzBot about it, the series was picked up for whenever it was made. After this, Pops decided to take a two-month break to focus on schoolwork.

Xaviersantiago, a new director to the community, posted a page on the ROBLOXiwood Wiki about Beatles, a film based on the titular band and their story. In need of a director, writer, and producer, Pops stepped in to fulfill all three positions. Upon seeing Xavier's outrageous demands for the film that included a much-too-generous role for his own as Ed Sullivan, Pops left the project after just one day. Entranced by the idea of making a Beatles film, however, he started to write The Long and Winding Road. This project would later cause Xavier to convert his film to focus on The Doors. In this time, Pops began a partnership with director EpitomeOfInfamy, serving as a writer for the early scenes of the superhero film Bananaman. The League of Extraordinary Gentlemen finally continued production, as well. After complications in Poppleworks Media with VP BugaMeister, he was laid off and replaced with coollegodude1. A month later, Pops decided that he would change the entire Poppleworks Media roster of upcoming films. In a public blog post, he announced a new wave of experimental films.

Pops later quit mid-2016, cancelling all future projects. Despite his long stint in the community, the constant failure to produce anything successful took a large toll on his mental health and created an addiction to the concept that proved dangerous not only to his well-being, but to his real life which he had tried his best to balance over the years. Since then, Pops has been outspoken about his time in the community and its "ridiculous nature of taking itself as seriously as it did," but also acknowledges that he "should have been more realistic in [his] goals."