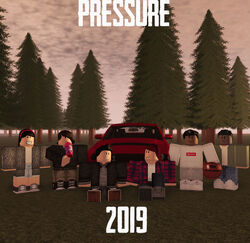 Pressure is an upcoming 2019 romance/drama film directed and written by Dare102102.

A high school basketball player, Zach Kennedy, has trouble focusing on school until he meets Cassidy Valentine. The two deal with problems life has to throw at them.

Writing started during dare102102's first week of school in September 2017 as a way to deal with stress. Production did not start until November 24th due to a busy schedule. Dare was actually very skeptical about making a film about this topic but decided to go through anyways. Dare102102 aims for a 2019 release of Pressure. Screenwriting concluded on January 3rd 2018. Filming will begin in mid to late February. There has been some minor rewrites to mirror dare's relationships.