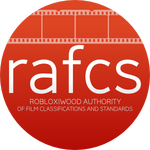 The ROBLOXiwood Authority of Film Classifications and Standards movie rating system is a feature designed by the ROBLOX Film Wikia admins to give potential viewers information about the content of films, and what to expect. RAFCS ratings are un-official, however it is the most common system in use for ROBLOX films and is endorsed by the wikia.

Because the ratings system is managed and implemented in a significantly different way than other systems, the RAFCS rating system does end up with unique problems. In most cases on the wikia, it is the director themselves that decide the rating of their film, rather than a committee or board. Perception of each individual rating can differ between one another, and what one person thinks is appropriate as a rating for a film, may not be what others believe is appropriate. Therefore the accuracy of this system is somewhat varied. The wikia does encourage community discussion on movie ratings to ensure that the film receives the most appropriate rating for its content.

The system does not have any actual power to prevent people from watching films and productions that may not be appropriate for them to watch. The rating system is merely a guideline for people to decide for themselves whether they should be watching the production or not, and to inform them prior on potentially offensive content. RAFCS and the wikia are not liable for any problems or issues that may arise out of use of the system.

Positions on the Ratings and Requirements:

The Production contains nothing in theme, language, nudity, sex, violence or other matters that would offend parents whose younger children view it. Some snippets of language may go beyond polite conversation but they are common everyday expressions. No stronger words are present. Depictions of violence are minimal. No nudity, gore, sex scenes or drug use are present in the motion picture.

EVERYBODY WITH CAUTION (EC)

The Production has more mature themes. There may be some profanity, very few mild sexual references and some depictions of violence. But these elements are not deemed so intense. There is no drug use content, gore, or nudity.

The Production has much more mature of a theme, violence, sexual references, sensuality, gore, mild language, adult activities or other elements. Any drug use will fall at least under this category. Minor sexual-references can be present. There may be depictions of violence but generally not both realistic and extreme or persistent violence. Use of one of the harsher sexually-derived words, though only as an expletive, can be present.

The Production is the near equivalent of an E-13, however the production has much more intense adult language, gore, violence, themes, or much more mild sexual references. A majority of controversial topics can fall under this film.

The Production contains some adult material, it may include adult themes, adult activity, hard language, intense or persistent violence, intense sexual references or brief nudity, drug abuse or other elements. Very heavy controversial topics can be present in the film

The Production can be based on violence, on-screen sex, aberrational behavior, drug abuse or any other element that most parents would consider too strong and therefore off-limits for viewing by their children under 18. The production can have extreme examples of language, gore, and the most extreme of controversial topics. Any type of pornographic, obscene, nudist, or exploitation films must be under this category.

Any production under this rating MUST have the Mature Content template at the top of the article.

Materials that have not been rated by the Movie Ratings. Usually a film that either the movie director, or the editor of the page (see 'If you see a Movie article with no Movie Rating, and are unsure what to do') does not know which film rating the movie is, or if the admins of this website are just unsure what to rank it, OR if the materials are extended/labeled unrated by the movie-maker will get this rating.

How to add Ratings to a Director Article

Once you have identified the rating for that director, go to the edit page of the article, hover over the green jigsaw at the top, and click edit at the bottom right corner of the dialog that comes up. Scroll down to the famemeter section, and paste the name of the image of that rating. They are given below:

It is possible that some movies have adopted a system that is separate from the wikia. Some companies label their films a G instead of a PG-13 rating through their trailers or descriptions. Other times, companies adopt a system of rankings entirely different than the standard RAFCS system. For movies that have different rating systems or follow their own criteria for the standard RAFCS system, the wiki MUST allow them to put their own custom rating on their movies. It should be noted that the RAFCS does not support these special ratings and will not be responsible for any matters arising from these ratings.

Trailer Cards are Images that are added to the beginning of production trailers. At the wiki, we have an official set we use, which you can find in Category:Trailer Cards. If you are unsure of what card to use, follow this guide depending on the production you are making:

Trailer card (All Audiences) for E to EC ratings

Trailer card (Unrated) for U ratings

If you see a Movie article with no Movie Rating, and are unsure what to do:

Just simply post this: {{MovieRatingNeeded}} into the article (make sure you're in Source mode). It will add a message at the top of the page and put the article in a category so people know it needs a rating. The message will look like this:

This article about a film needs a Movie Rating. You can help ROBLOX Film Wiki by adding one (Please Refer to the Movie Ratings page for more information first).

Designs for use on Posters

Designs for use on Wikia articles (infoboxes)