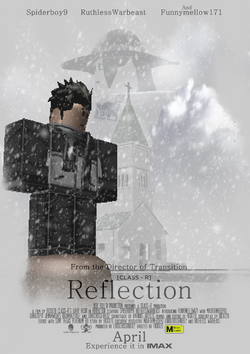 Reflection is a British-American Short Film, written and directed by Rick120. The film also has LordCrossfire82 attached as producer.

After a major accident, Gary Bush finds himself returning to the broken down remains of his home, while there he reflects on some of the most meaningful moments in his life; learning a valuable lesson in the process.

The film started production as far back as September 2014, and had originally been written as a standalone Gary Bush movie. Film began in November 2014 and ended in January 2015, however the films production halted several times for various reasons.

Ultimately in February, while editing a 2nd cut of the film; director Rick120 didn't like how the movie was looking and decided not to finish it. In March, the film was officially rewritten as a drama film and uses footage that was captured already as well as new footage filmed specifically for it. The short officially had it's premiere on April 3, 2015.

While the short received positive reviews. Most reviewers mentioned that the cinematography, characters, plot and music were all well done.

However, some reviewers believe the character of Gary Bush was an unnecessary element of the short while others believe that some of the plot elements were too ambiguous as well as the shorts slow-pace.