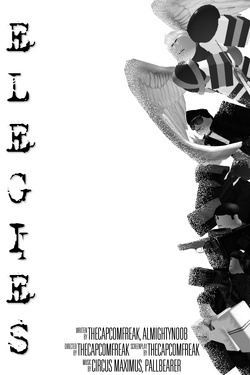 Rescind: Elegies (also known as, simply, Elegies) is an upcoming 2017 superhero film, directed and produced by somekiryu, and co-directed by AlmightyNoob. It is the conclusion to his 8-year-long cinematic universe, the Rescind Cinematic Universe.

Ten years after the events of Darkvalk, Mike is a nomad who is slowly dying from the abrasive nature of his powers overwhelming his body. Meanwhile, a holy being, Archangel, descends to Earth to gather forces to stop a metaphysical enemy; The Deathconsciousness. Between saving the human race and stopping The Deathconsciousness, Archangel (St. Lucas), Noak LaCroix, Mike Hike, Astra Baker, Xaier Sato, Tu'si Purser and Jeremy Smith are faced with reparing the damage done by The One and Malice as Mike slowly grows weaker. However, they are soon meet with resistance when they realize not all superhumans are on their side.

Production for Rescind: Elegies started on August 24th, 2015. Since then, the film has been produced almost entirely in ROBLOX Studio. The film went under a rewrite in March, and became part of it's own trilogy, starting with the short film Earthmover. This was followed by Bloodhail, which will be followed by the film itself.

However, on May 26th, 2016, the final draft for R:E was completed. Filming had already begun at this point, but the screenplay had not yet been finished. After BenIsLegit agreed to animate for the movie, the script underwent many changes, including more violent fight scenes and more detailed actions. Later, the screenplay was finished. BenIsLegit did a few animations, but instead showed somekiryu how to animate characters so he didn't have to. The film has been in production for two years. On December 21st, 2016, the film was split into two parts. Part 1 was released later that night.

On September 29th, the edited footage filmed for Elegies hitherto was scrapped as the script went under it's third and final draft.