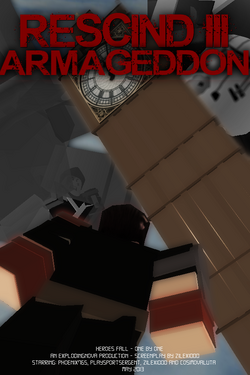 Rescind III: Armageddon is a 2013 American superhero film directed by ThecapcomFreak and written by both himself and Zilex1000. The film was also produced by Neverwakening Productions. It is the third and final film in the Rescind trilogy.

Spoilers ahead! Do not read if you have not seen Rescind II: Birth of Evil!

President Obama threatens both Mike and Trevor to shut down DRAT to save them all, after the events of Rescind II, where Vengeance turned into Malice. As the duo try to stop Malice, Malice begins to slowly destroy the entire world, one country after another.

The film began production shortly after the release of Rescind II, with filming being completed at least a week before its inital release.

When Rescind III was released on May 3, people who lived in the US and Germany were both unable to see it. Olympus23 brought this to Capcom's attention, and he replaced what he thought was the song that was making it unable to be seen. He then re-uploaded the film.

This version was also blocked in the US because there was at least one other song that got copyrighted. Olympus brought this to his attention again, and he replaced all the songs in the film, and reuploaded it. It is now available worldwide, after it's third upload on May 5, 2013.

The film had a very positive reception.