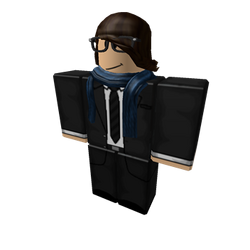 Rick120 is a European Roblox film director. He is the founder of and current owner of Rick Roll'd Productions.

Rick120 joined ROBLOX on June 30, 2008, at first taking up an interest in place building and spent until the end of 2010 building aircraft; during which time he met his good friend Madformerspro. After viewing ROBLOX 2012: End of Roblox and Army of Brothers, both directed by Revenger123, as well at The GodBuilder by DonCurrency, Rick120 started his career as a director.

In July, Rick120 gained the rights to make a reboot of the 2010 Movie Revenger, however there had officially been no confirmed plans on making one since. In December, Rick released Currency, a biographical drama film about former fellow director, DonCurrency.

Rick120 worked with Madformerspro on Dream Clouds. On February 22, 2014, while filming a scene for the film, an argument broke out on set, resulting in the exilement of Mastergyrooman25 after a series of vandalizations on the ROBLOX Film wiki before it was realized on March 15 that Princeofsun2380 was behind a series of arguments on the filming of the movie.

On September 15, Rick120 officially dropped Dream Clouds indefinitely and is currently on a temporary retirement, due to both frequent frustrations since March 2014, as well as an argument- followed by subsequent fallout- with Zilex1000, involving his opinions of the 2014 BLOX Awards. After a short break, Rick announced his return, cancelling Dream Clouds.

On October 15, 2014 at Octoberfest, Rick released Transition, an autobiography that details what happened behind the camera during the production of Dream Clouds. It got a very positive reception.

In January 2015, Rick was working on The Fall of Gary Bush, a non-canon sequel to Gary Bush III: Dark Days, and received severe criticism by CosimoValuta- to a point which insulted Rick personally. Despite this, Rick continued work on the film, however he ultimately dropped production due to the demands on the film. The film was officially retitled to Reflection in March, the short was released on April 3, 2015 to a polarized audience reaction.

Rick went on a break from directing on February 19, 2015, and returned in late March, with his line-up plan, which include the Dream Clouds Reboot , as well as announcing his plans to reboot The Vortex Security Trilogy. He signed on as Assistant Screenwriter and Producer for The Renegade, the revamp to Hyperblue- which was released in September, 2015.

In May 2015, Rick announced plans to remake the previously cancelled; The Fall due to the negative audience reaction to Reflection- however those plans were quickly scrapped. His next release was Transparency- which was released to an overwhelming acclaim- this was followed by Obligation in November 2015. In April 2016 he released Dream Clouds (Reboot), followed by The House (Reboot) in June.

Rick had since then been in production of Injustice until around December 2016 when he decided to put his focus on another project after feeling tied down creatively. In January 2017, he released Transgression. Two weeks later Rick decided to split Injustice into two part, releasing Part 1 on February 1, 2017.