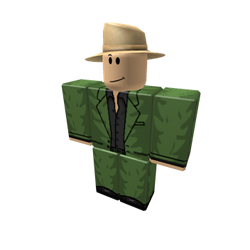 RuthlessWarbeast is a ROBLOXian actor and filmmaker. He is the co-owner of ConFilms. He just released his directional debut with A Bad Night.

RuthlessWarbeast started off in Headless Films, with his brother HeadlessHorseman12 and his cousin KrisBush15. He has always had the idea of making movies but could never get a start off. He has acted in all of The Bush films and some of DonCurrency and ThecapcomFreak's movies. Ruth now wants to start filming and publishing his own films. Now he is going to start his own string of comedy and tragic, films and shorts. First of them being A Bad Night.