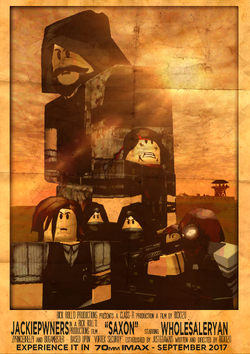 Saxon, also known as Saxon: A VS Declassified File, is a 2017 British film, written and directed by Rick120.

Set 11 years before Endgame, the film follows Mikael Saxon as he is called to an abandoned outpost, after a trespasser claims to know him... a claim proven to be correct.

Production began with Vortex Security V: Division Ghost in late 2016, the film originally penned to be a flashback scene in the movie. However major rewrites to the film later during 2017, meant that the scene had little place within the film and dropped.

However in August 2017, during a break while making Nominal Scale, Rick decided to dig up the scene, and after a day of rewrites, decided to rework it into a movie. Filming began on August 30, 2017 and ended on September 6, with the film being released the following day.

The film recieved a positive reaction, with praises going to the writing, tone and cinematography, however criticisms mainly going to the editing, visual effects not being up to par and the occasional spelling error.