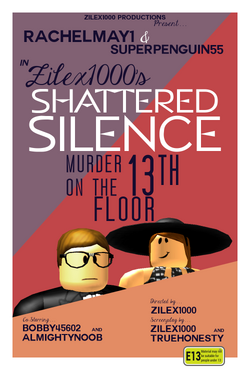 Shattered Silence: Murder On The 13th Floor was the cancelled fifth upcoming fifth film by Zilex1000. It was set to be released sometime in 2015, distributed by Zilex1000 Productions.

It was to be the second film in Shattered Silence trilogy, following the events of Shattered Silence: Fall From Grace and Nancy's Memories. It was to star Rachelmay1, Superpenguin55, AlmightyNoob and Bobby45602.

The film was cancelled when Zilex1000 departed ROBLOX.

The two most acclaimed detectives in Lawndale, Luis Clark and Nancy Thompson, are invited to attend a gala in London representing their small town. Arriving at a lavish, glamourous hotel in the middle of the world's most famous city, Luis and Nancy are set to enjoy themselves and relish in this long overdue break.

However, this is no time for a vacation as a young woman suddenly vanishes without a trace, and as the stakes heighten and the body count slowly rises, the guilt of Margo's murder comes back to haunt Nancy as she deals with her inner demons. With Luis becoming more distant as he becomes frustrated with his inability to find any sort of clues, Nancy attempts to solve the case alone. But that is their biggest mistake.

A mistake that could cost them their lives.

Zilex postponed the film's official annoucement until September 16th, 2014, where he annouced that the film would be the next Zilex1000 Production's film, and unveiled the teaser poster. With the release of the first teaser trailer, it was confirmed that the film would be released in 2015. The full soundtrack was released a week later on November 7th, 2014. A second teaser trailer was released on November 14th, confirming the start of production. On Novermber 23rd, the first theatrical trailer was released. After a tie-in promotion was settled with Team Derp Squad, a teaser was released to the Team Derp Squad channel exclusively. Later that week, it was settled that Team Derp Squad would act as an official sponsor for Shattered Silence: Murder On The 13th Floor. In the New Year, Zilex released a cryptic tweet on his twitter in relation to the film. No further information had been disclosed until later on in the month, when Zilex1000 officially quit ROBLOX.

The film was cancelled.