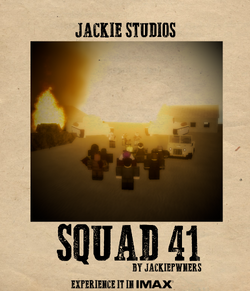 Squad 41 is a 2017 superhero action film written, directed, and produced by Jackiepwners.

When Raiden is sent on a mission to aid in the Syrian Civil War, he becomes trapped in Syria and is soon declared MIA. The rest of Squad 41 plan to search and rescue Raiden, and must approach the terrors of war.

During the summers of 2017, the script for Squad 41 was being written in June and finished in July. The script was read over by 2 writers and is planned to be released in 2017. The film will include advanced use of animation, such as doubled rigs, fight scenes, and such. Production started July 15th. On August 30th, Squad 41 was released.