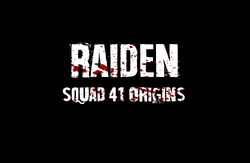 Squad 41 Origins: Raiden is a 2017 short film produced, written, and directed by Jackiepwners

After an isolated community's leader dies, the population seeks to defend themselves from the outside world. Coincidentally an exodus is planned during the community's defense. However, one boy named Raiden refuses to help.

In February 2017, Jackiepwners wanted to continue the branch of the UCU (Unstoppables Cintematic Universe) planning an upcoming film Squad 41. The entire short film was made in ROBLOX Studio. On March 10, filming was completed, and released.