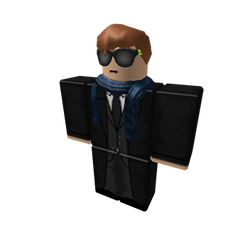 Superpenguin55 is a retired New Zealand actor, set-builder and director. He was the founder and manager of the Lone Penguin Films, and its successor, Origin Penguin.

Though Superpenguin had joined ROBLOX in July 2010, it was towards the end of 2011 that he joined the ROBLOXiwood community. In December of that year, he played his first acting role in Zilex1000's short, North by Northwest. His second and final role in 2011 was Run Laurie Run. In 2012, Super had directed his first and only film, The Coup. Super set up Lone Penguin Films in 2012 to create an actor resource for his future films. at its peak, about 20 actors were under the company. In April 2013, Super closed down Lone Penguin Films. Super attempted to direct more films throughout the rest of his career, however none reached completion.

2013 was Super's most productive year in terms of acting, overall having 12 major and minor roles. During this year, he also co-hosted the 2013 BLOX Awards with Zilex1000 and Arclordrpg. During this, he was awarded the ROBLOXiwood Award for his contributions to the community. His role as Grant in Through Frosted Glass earned him Best Actor in a Leading Role (for Dramatic Productions) and the Actor of the Year award at the 2013 Golden Noob Awards. During his career, Super created a number of sets for himself, and other directors.

Super established a new film company, the Origin Penguin Motion Picture Company in 2014. Red Moscow was originally planned to be the debut film from Origin Penguin. In 2014, he co-hosted the BLOX Awards again for the second and final time. On the 3rd of February 2015, Super announced his retirement and departure from the ROBLOXiwood community, and also the closure of Origin Penguin. His final acting role was in Rick120's Reflection, playing Seth Morris.