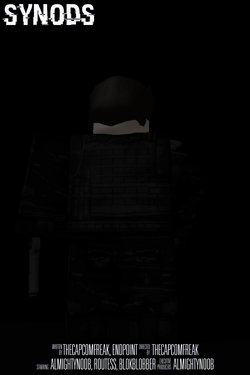 Synods is a 2017 superhero short film, directed by Endpoint, and produced by ThecapcomFreak. It is a reboot of the Stopmotion101 Studios film, Moon Wars.

A specially trained unit is sent into space to investigate a consistent interference with equipment. After deploying, "Skull" and his team make a frightening discovery.

After considering plot holes for the Time Heroes Cinematic Universe (THCU), ThecapcomFreak offered to reboot the first three movies of the Moon Wars franchise while Endpoint rebooted the final two films, which, along with Revelations, was the source for many of them. Endpoint agreed to this, and writing for Synods commenced. After ThecapcomFreak retired, however, he dropped the project. It was picked up by Endpoint after the release of The Dark Knight: Apocalypse.