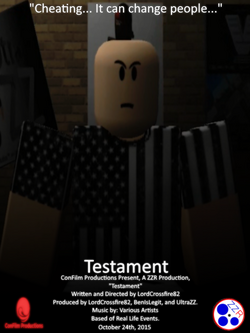 Testament is a 2015 short written and directed by LordCrossfire82. It was produced by BenIsLegit and co-produced by Ultrazz.

A boy named Dale struggles after he finds out his girlfriend is cheating on him.

October 9th, 2015. ConFIlms owner and head Director LordCrossfire82. Announced that he was going to do a short for the upcoming OctoberFest. So while talking with Ultrazz, they decided the name to be Testament, and made out the plot and character designs that night.

BenIsLegit was brought on to help and guide Lord in the right direction with the short, and became his mentor throughout the filming of the short. The film was completed on October 18, 2015 and was released on October 22, 2015.

On February 29, 2016, LordCrossfire82 deleted his YouTube channel and the video was lost. However, on April 21, 2016, he announced that he planned on reuploading Testament after returning.