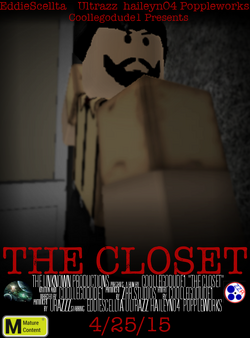 The Closet is an 2015 drama short written and directed by Coollegodude1 and distributed by The Unknown Productions and ZZR Studios. The short was released April 25, 2015 to mixed reviews.

A boy is having trouble coming out to his parents.

The script went through some changes Mid-February and BATMAN21005 signed on as Set Builder.

The short premiered at The 21005 Theatre to mixed reviews.

The short received mixed reviews. Most reviewers praised the use of homosexuality in a ROBLOX film. However some viewers thought the lack of a soundtrack and character development ruined the short.