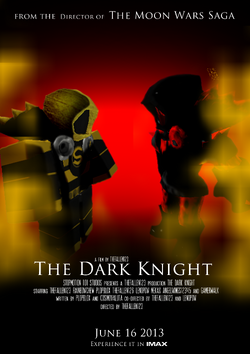 The Dark Knight is a 2013 American superhero film written by PlopBLOX and ██████████. The film is also co-directed by both TheFallen123 and Lenopow.

The film follows a high schooler named Danny Parker as his life is thrown into chaos when he finds out he is part of a society on a planet filled with superheroes from around the universe, and is told he is the chosen one to protect earth.  When earth is targeted by an inter-dimensional being known as Nightmare, Danny must live up to his title, and defend earth.

As far back as the conclusion of the Moon Wars saga, the plans for a film about a hero named The Dark Knight were being formed. In 2013, TheFallen123 announced that filming would begin for The Dark Knight, and ██████████ was called on as a scriptwriter for Part 1 and then later the rest of the movie along with PlopBLOX. The film was planned to be co-directed by Thefallen123 and also Lenopow.

Reception has been generally positive.

Not long after the release of Part 3 of The Dark Knight, it was unofficially announced that a sequel was in the works for 2014, with TheFallen123, ██████████, and PlopBLOX returning to the project by the name of Knightfall.