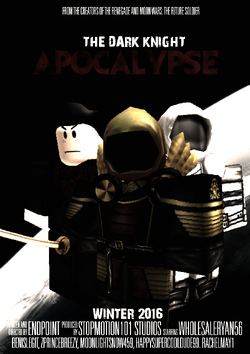 The Dark Knight: Apocalypse (also known as The Dark Knight), is a 2017 action drama directed and written by Endpoint. The film is produced by Stopmotion101 Studios. It is a reboot of The Dark Knight franchise and is the 11th film in the Time Heroes franchise.

When a powerful force attacks Earth, a vigilante, The Dark Knight, attempts to defend the city.

During the production of Moon Wars: The Future Soldier, Endpoint realized that The Dark Knight franchise had major plot holes due to the Moon Wars (Film Series) being rebooted. He decided to reboot the The Dark Knight and its sequel, to correct these plot holes and retell the story in a different fashion. Screenwriting began as early as June, 2016. The film was announced during the premiere of Moon Wars: The Future Soldier on July 18th, and filming is to commence mid-late August of 2016.

Part one of the film was released Christmas of 2016, with filming for the second part commencing soon after. The second part to the film is planned to be released summer of 2017.

Part two of the film was released August 3rd, but due to complications, was taken down and re-uploaded the night of August 4th.

Reception to Part one was mainly positive, with the audience widely enjoying the comedy, action and story within the film.