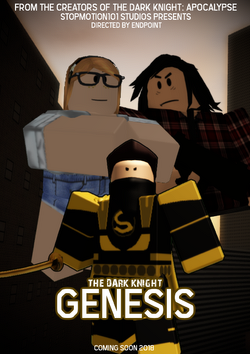 The Dark Knight: Genesis is a 2019 superhero short, directed and produced by Endpoint and Jackiepwners. It sets up an origin story for Danny Parker and his journey as The Dark Knight.

After a close friend is murdered, a group of friends use their night of relaxation and meditation to come up with a wild solution to the soaring crime rates in their hometown.

The Dark Knight: Genesis was originally planned to be a film. However, after time issues and no way of actually completing the production, it was scrapped. Endpoint soon announced to his fans the cancellation of the planned film and gave alternative options.

It was eventually decided to have the written film transcribed into short form, and director Jackiepwners was willing to take the project into his hands. The short was made in five days and uploaded that weekend.

Reception for The Dark Knight: Genesis was positive, with many praising the animation and humor within the short, as well as the nostalgic callbacks to the original non-canon films.