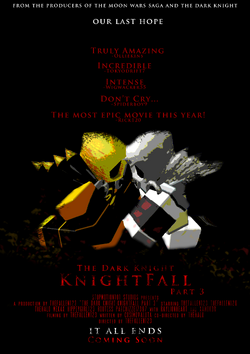 Three years after the events of The Dark Knight, Danny finds himself struggling to be the Dark Knight, and live his life normally. However, the Crimson Empire has come out of dormancy and their first target is Earth. But when Danny suddenly vanishes from the face of the Earth, a new Dark Knight must be born.

On July 26th, 2013, TheFallen123 announced that there would be a The Dark Knight 2. On January 2, 2014, CosimoValuta returned to write the film. TheFallen123 decided to treat each part as it's own individual movie due to it's runtime, therefore he created posters for each part.

Filming for Part One finished on March 8th, a day before the planned release date. On March 9th, the film was set to be released but had to be pushed back due to technical difficulties with the rendering and audio changes. The silent version was finally released on March 10th, with the voiced version yet to be released. On March 16th, 2014 a teaser poster was released for part two, and on July 6th, part two was released.

On July 19th and 20th, 2014 two teaser posters were released for part three, the final part. Filming for part three began on July 22nd, and was projected to be finished mid-August. This ended up taking longer, into December. The final part was finished editing on the 27th of December, but it took until the 28th to be released due to pixelation issues and long rendering times.

The reception to The Dark Knight: Knightfall was mixed at best, with opinions coming from opposite ends of the scale. Both sides noted some plot holes, but while some enjoyed the action and the story, others did not as they disliked characters, cliches and the overall look of the film.

Cast: Part One (in order of appearance)