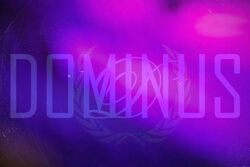 The Dominus was a series directed by tokyodrift7 and produced by Dreen Four Productions It is based on real characters in the 'Dominus' hat series. The first season premiered on March 15, 2014. The series closed in July, but a new series recalling the events after it is in the works.

Born from pure hatred, Dominus Infernus is released upon the world by the Timelord and destroys every world superpower in his wake. Arising from the ashes of the old armies, the Resistance stand alone to save the world from complete annihilation.

In February 2014, Tokyo began making the series, by building sets and creating the plot. On March 15th, the first episode was released. From mid-March to early April, the second episode is written and filmed. On April 10th, the second episode was released. Speical effects were decided and ready to use on June 1 , 2014. Actors are the only thing tokyodrift7 needs as of June 2, 2014. On July 9, 2014, tokyodrift7 decided to make the series 6 episodes and have 1 season. On August 6, 2014, tokyodrift7 decided to cancel the series and do a reboot later on. Main reasons are lack of ideas for later episodes and lack of actors. A final episode will be worked on and released. The series will have a continuation, going by the name of "Cryptic". It will follow a few years after the events of The Dominus: Origin Of Evil.