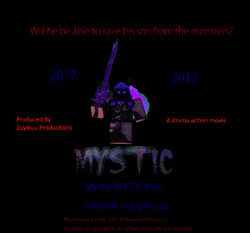 The Mystic is a film made by Zuyikuu

One day, a dead man comes back to life by Three Ancient Warriors to fend off a horrible person named Galantis to either, protect his son, or save Earth along it in a big city in Canada and his name was The Mystic, But The Mystic refuses and wants to save his son and daughter only and not fend off Galantis in the ancient war of the Dominus's.

Media for the teaser trailer will come soon.