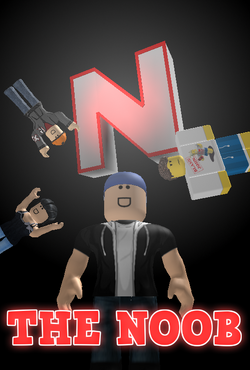 The Noob is a series created by Bobtheclumsyman.

The Noob is your average Roblox noob: acts strange, reacts in absurd ways, likes to make fun of his enemies even though they have more skill than him and tries some of the weirdest tactics to get him out of some of the terrifying scenarios he has ever come across. Join the Noob on his misadventures in Roblox as he meets new friends along the way and tackles some of the scariest and bizarre people and places he has ever encountered in his life.

The Noob started on the 22nd of March 2010, Season 1 was very different to newer episodes in the franchise because there wasn't any editing in the episodes because it all consisted of the director Bobtheclumsyman playing a Roblox game and being bad at it.

Episode quality got slightly better during Season 2 as Bob focused on making the editing better, in Season 2 The Noob started using Microsoft Sam to speak. The Noob started to have story oriented episodes in Season 2 to help character development. Season 3 was The Noob Movie: Roblox At War, this was Bob's first movie in Roblox and the first film in The Noob Franchise.

By Season 4 the episode quality for The Noob was much better than Season 1 and Season 2 combined due to a change in the screen recorder and video editor, also the footage was less laggy. The Noob lost his Microsoft Sam voice in season 4, this was because the majority of comments on The Noob's voice where mostly negative.

Season 5 was The Noob Movie II: Dimension Tension. This movie introduced the character Susan, it was also a sequel to the first movie. Due to lack of interest, Season 6 was never fully produced and only had 1 episode created. Season 6 was supposed to have 15 episodes before bob decided to cancel the series.

An entirely new Franchise that takes place in The Noob universe was put into consideration on the 9th of December 2015 but later dropped.

On the 18th of March 2016, Bob announced a 4th installment in the franchise named The Noob Movie IV: Second Coming Of Corruptix.

On the 2nd of June 2016, Bob released the 4th installment in the movie series, The Noob Movie IV: Second Coming Of Corruptix.

On the 27th of September 2016, Bob released The Noob: Shedletsky's Mighty Castle

On the 25th of December 2016, Bob released a trailer for the 5th and last movie in the series, The Noob Movie V: Final Adventure.

On the 7th of October 2017, Bob released the 5th and final installment of The Noob, The Noob Movie V: Final Adventure