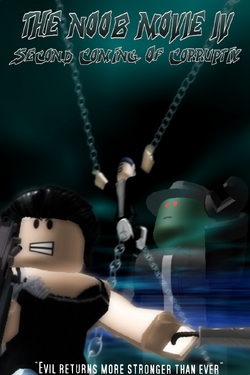 The Noob Movie IV: Second Coming Of Corruptix is the fourth installment in The Noob Franchise it takes place 2 years after the events of The Noob Movie III: Descent Into Eternal Darkness.

2 years after the events of Descent Into Eternal Darkness, Corruptix Lives as ROBLOX tries it's best efforts to combat Corruptix and his new 2 assistants LethalByte and PowerProtocol. Meanwhile Susan is ordered to evacuate the country and refuses to, hoping to kill corruptix for killing The Noob she is looking for revenge.

The Noob has problems of his own as well as he is trapped in purgatory between reality and Ro-heaven, held in chains to stop him from escaping. Being able to communicate with Corruptix, The Noob is Roblox's only hope as he must find a way to physiologically stop Corruptix from destroying Roblox.

On the 28th of March 2016, the intro for the movie was posted on YouTube. Some characters had more brightly colored colors than there original designs and sometimes the faces would be a different color. This was due to a green screen problem that occurred when shooting the intro.

On the 18th Of April 2016, the sets for the film were all completed. Filming and Editing of the film shortly started after.