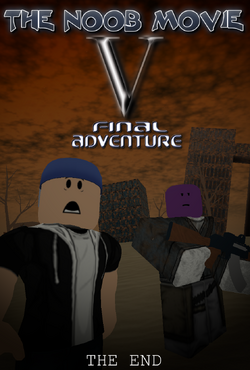 The Noob Movie V: Final Adventure is the 5th and final installment in The Noob movie series and the entire franchise directed by Bobtheclumsyman.

The Noob, dead for 3 years has grown to love the afterlife that he has adapted to living in thanks to Susan and his now decorrupted twin brother, Corruptix. However, when The Noob falls into the anomaly in time and space it sends him on a adventure through the remains of a post apocalyptic Roblox to the very origins of his past.

A teaser for the film was released on the 25th of December 2016.

Set Production for the film started on the 25th of December 2016.

Bob had stated that filming will begin sometime early 2017.

The script for the film was completed on the 26th of December 2016.

All props and models for the film were all designed and finished on the 14th of January 2017.

Production of the film halted on the 23rd of May 2017 after the film's director Bobtheclumsyman suffered trauma after attending an Ariana Grande concert on the 22nd of May 2017 and witnessing the incident. Due to the film's nature, Bob made a choice to put the production on halt.

Filming for the movie finished on the 7th of October 2017

The movie was released on the 8th of October 2017

(To see the entire film, go to the videos Youtube page and there should be a playlist active)