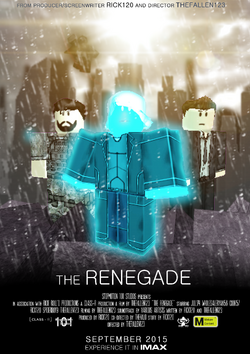 The Renegade is a 2015 film directed by TheFallen123. Rick120 is the producer and screenwriter. It is a reboot Hyperblue. It is the 5th film in the Time Heroes franchise. The film was released on Sunday, September 13, 2015.

When an experiment goes wrong, an electric hero is born.

During production of Blind Justice, director TheFallen123 had been highly considering rebooting one of his earlier works Hyperblue, since the Neverwakening version had been considered non-canon. During which time, fellow director Rick120 expressed slight interest in screenwriting a possible reboot, to which Fallen allowed him to try.

In March, 2015; Rick released a concept design of the character design and signed on as the film's Producer, during which Fallen confirmed the film's title as The Renegade and it would be his next film after Blind Justice. The script was written and reworked, and the film began to be filmed afterwards, due for release in September 2015. The film was released on Sunday, September 13, 2015.