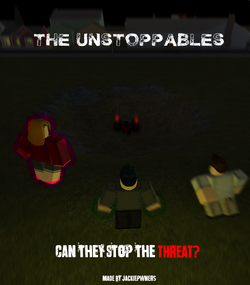 The Unstoppables is a 2016 superhero film directed, written, and produced by Jackiepwners.

In a small town, a strict school's confiscated items are driven to a lab to be used for a project. But when three teenagers, Johnny, Gwen, and Aiden, attempt to take back their items, something goes wrong in the lab and the three are given powers. When they escape the lab, they accidentally let out a threatening subject into their town.

Jackiepwners and two friends helped started writing the script for The Unstoppables in April to August 2016 after he acquired Sony Vegas to help him edit his films. Jackie started filming on October 18, 2016. The film was released in December 14, 2016.

'The Unstoppables' gained mixed reviews, pointing out cinematography and being predictable. On the other side, it gained positive reception pointing out improvements from previous projects.